Human judges in the Torah are repeatedly called Elohim (see Exodus 21:6, 22:7, 8, 27), a name usually used for God. In Psalm 82, God addresses judges with outrage: “How long will you judge perversely? Judge the lowly and the orphan, poor and destitute- act righteously!” And to emphasize the combination of power and creatureliness, continues, “You are divine beings; children of the Most High are all of you. Nevertheless, you shall die like a mortal and as one of the authorities you shall fall.” Who are these judges? Angels of the Heavenly Court or human judges or both?

We have many images of God’s royal court composed of divine-like hosts. The prophet Isaiah portrays angels surrounding God chanting, “Holy, holy, holy is the God of Hosts” (6:1). At the start of the book of Job, the prosecuting angel challenges God to test the righteous Job. Jacob wrestles with a man also called Elohim, whom the rabbis will identify as the angel of Esau. The rabbis will teach that each nation has a protecting angel, duty-bound to act righteously on behalf of their respective people. Rashi (France, 1040-1105) understands the quote above as referring to the celestial angels, as do contemporary commentators such as Nahum Sarna, Robert Alter, and Benjamin Segal. Modern scholars place the image of celestial judges into the context of the ancient Near East where there was such a widespread belief, a vestige of mythology.

Most of the classic commentators see Psalm 82 as squarely addressing human judges. “Those who use their power unjustly,” this Psalmist says, “totter the very foundations of the world.” Rabbi Shimon ben Gamliel (second century of Israel) will teach, “On three things the world rests: on justice, on truth, and on peace” (Pirkei Avot 1:18).

Psalm 82 is chanted as the Psalm for Tuesday. The sages of the Talmud explained (Rosh Hashana 31a) that on the third day, the waters were gathered so as to reveal dry land (Genesis 1:9) and that the very foundation of society is justice justly administered. Power is the ability to effect change. We are each powerful and yet, those to whom we collectively give authority, whether by administering our courts or government, have an elevated civic and moral responsibility. Their failure to tend fairly to the weakest in society, our Psalmist proclaims, evokes God’s wrath.

Psalm 82 is dedicated to Julia Lupton. 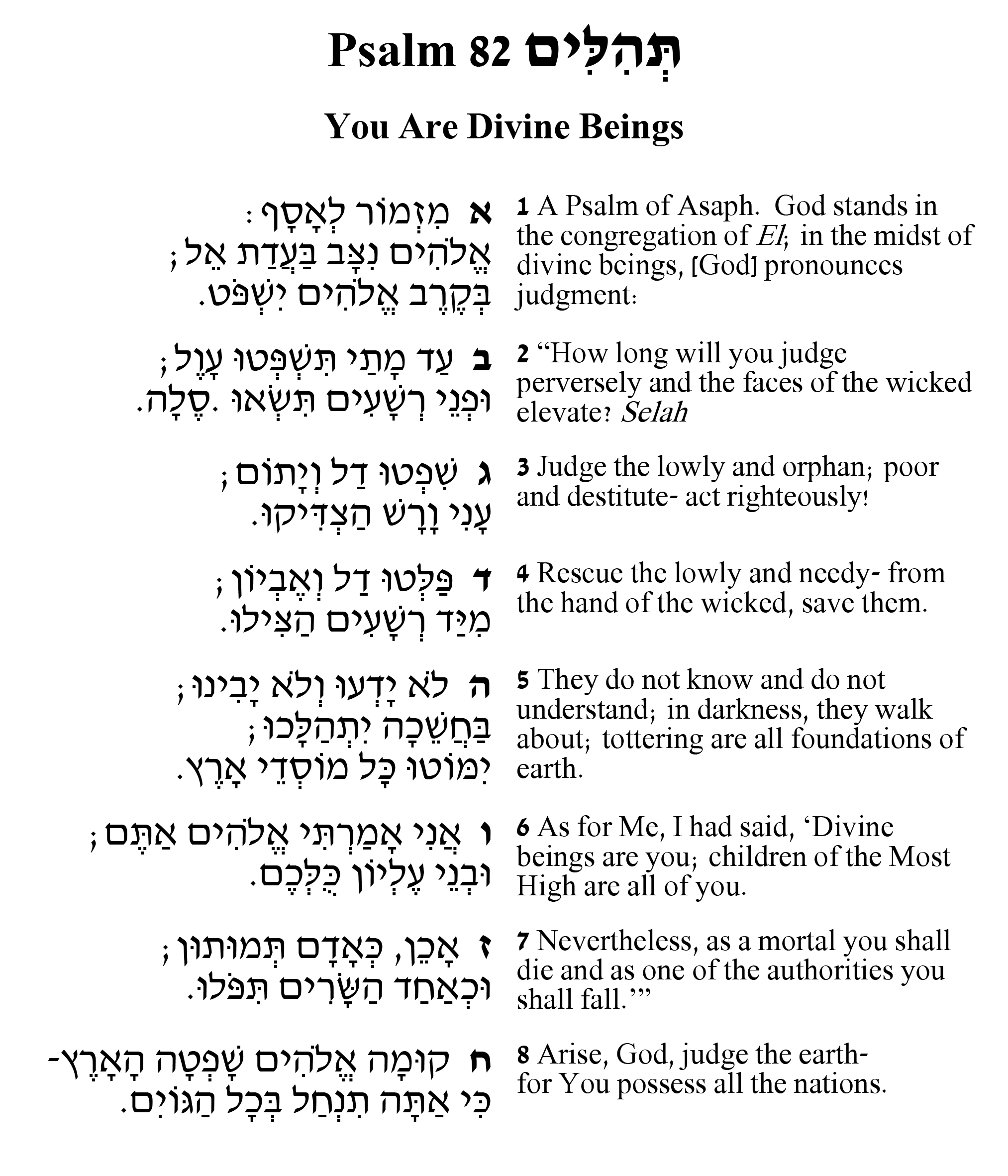