Psalm 58 at first reading sounds brutally vindictive: “The just shall rejoice on seeing vengeance, shall bathe feet in the blood of the wicked.” This Psalm, which distinctly begins addressing the wicked “leaders of justice,” is commonly read as an indictment against those who wield judicial power unjustly.

The Psalm lacks an inscription to give it a historical context, but is widely identified with Abner, the general of King Saul who continued to prompt the King to pursue David. In 1 Samuel 22, the focus of Psalm 57, David had cut the hem of King Saul’s garment when the oblivious King was in a cave. After the King emerged, David yelled out for him to look at his cut hem, prompting the King’s awareness that David was not his foe. And yet, King Saul would later hunt David again (1 Samuel 26). Why? The early rabbinic commentators point to Abner, King Saul’s general and confidant (see Jerusalem Talmud, Sotah 1:8 and B. Sanhedrin 49a), who allegedly persuaded the King that the tear of the garment was due to a thorn and not as David had claimed, a surreptitious cutting. Abner is for the rabbis the prototype of the judge who refuses to look at the evidence, for a garment that is torn has jagged edges, rather than cut evenly. Such a distortion of truth is the way of corrupt judges, who (now quoting the Orthodox commentary Artscroll): “Saul’s cunning magistrates cloak their crime in a robe of justice claiming their every verdict is based on the exact, precise weighing of the letter of the law.”

Although the trajectory of the Psalm is clear, many of the verses are obscure in regard to the details. We are also to ponder, What is the nature of righteous indignation and how strongly, namely violently, should such outrage over injustice be expressed? 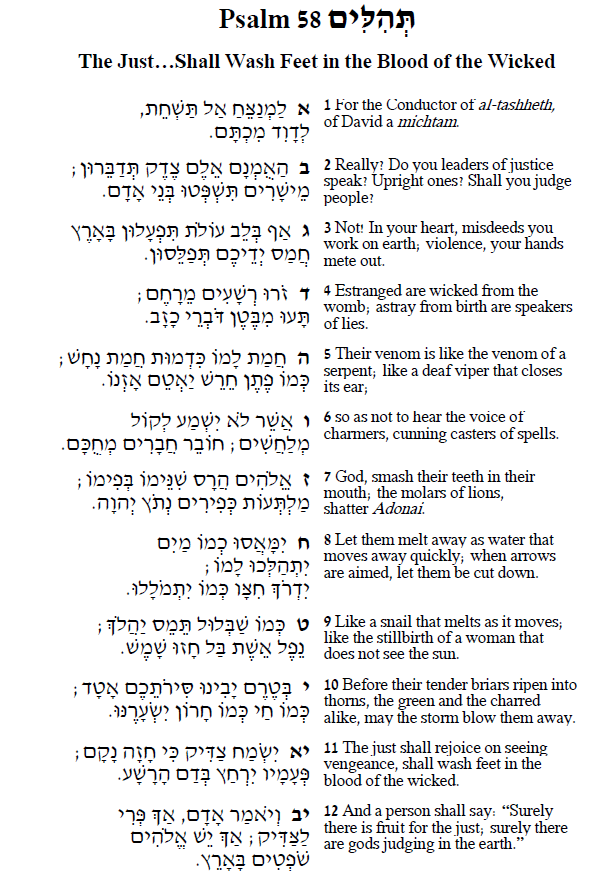