“Let Me Awaken the Dawn” from Psalm 57 seems an appropriate title in anticipation of Election Day.
The Psalm’s introduction places David in a cave, hiding from King Saul who seeks to kill him (I Samuel 24). The King enters the cave to relieve himself. David stealthily cuts off a piece of the King’s garment. After King Saul emerges from the cave, David yells for the King to see that the corner of his garment was cut. David, still hiding, says, “I have not sinned against you- yet you hunt my life to take it.”
King Saul replies, “Is that your voice my son, David” and then he weeps, acknowledges David’s faithfulness, and expresses remorse for his extended pursuit. King Saul proclaims that David would yet become the King of Israel and asks for a pledge that as the future King, he will protect Saul’s family. This dramatic encounter marks a new dawn for the young man, David.
Verse 9 reads: “Awake my Glory, awake lute and lyre; Let me awaken the dawn.” As is the nature of our tradition, a close reading evokes nuances in words and multiple understandings. The Glory may refer to God: Awake so that I may praise you. Or glory (with a small “g”) may refer to the Psalmist’s own divine spirit evoked within him. As for waking the dawn, the rabbis in the Talmud (B. Berachot 4a) cite this verse as evidence that David would awake each day when it was still dark outside, offering support for the folktale that David had a lyre on his door and at midnight, the wind would blow to awaken David to prayer and study. Rashi, the sage of 11th century, France, commented, “In contrast to other king’s who were awakened by the dawn, David “would awaken the dawn.” 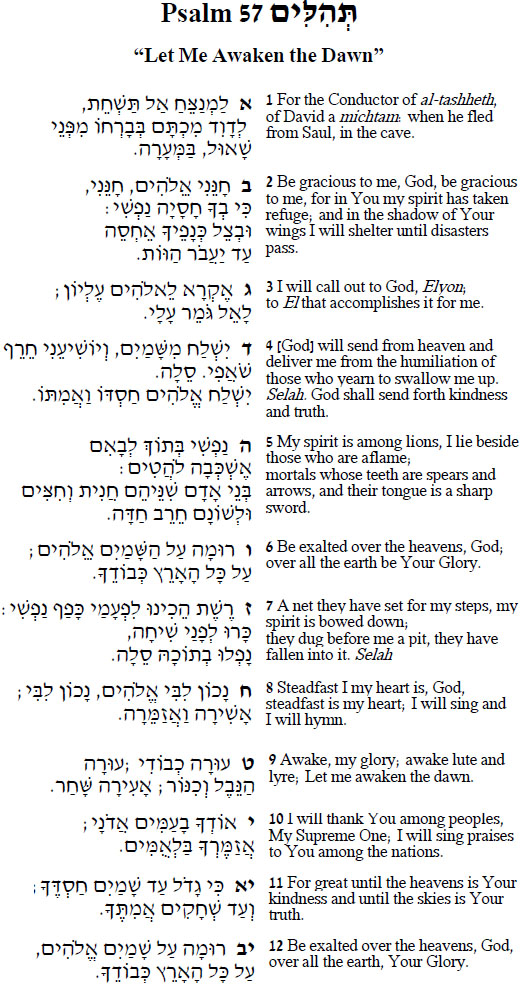