Do you have a special perfume bottle purchased for yourself or as a special gift for someone else? Another name for such small bottles with an elongated stem is tear catcher or lachrymatory (with lacrima meaning tear in Latin). Such small bottles were often found in Greco-Roman tombs, including among Jews in the Land of Israel. Below are a pair of such bottles, one dating from the time of the Hasmoneans (2nd century BCE) and the other from 20th century Israel. According to folk tale, the more tears gathered the greater the show of love over the departed. In the wikipedia entry for “tear catchers” their origin is attributed to Psalm 56:9: “My wanderings, You have counted; putting each of my tears into your bottle. Are they not in your account-book?” Tear-catchers were popular in Victorian England and given a boost more recently by Callie Khouri’s 1996 bestselling novel Divine Secrets of the Ya-Ya Sisterhood in which a character gives her mother a lachrymatory. You can find such identified containers on the internet at “Tear Catcher Gifts” and on Etsy. Contemporary scholars hold that these ancient containers held perfumes (perhaps to offset the smell), rather than tears. Chemists have shown that the residue in such containers is usually of fragrances.

And yet, the Psalmist’s image of God gathering each tear and placing them in a bottle has great spiritual significance and marks a turning point in the Psalm. As is a familiar theme, the Psalmist is endangered by enemies. The introduction identifies this as the moment “when the Philistines took David in Gath,” described in I Samuel 21: 11-16. The Psalter is frightened and pleads for God’s vengeance on his tormentors, but then a shift toward a calm of trust. The tear catcher verse is the bridge, a statement of God’s attention to each tear of the Psalter, conveying tender, personal concern. We are left to wonder what is the nature of these tears? Are they over fear of an enemy or concern for God? The sages in the Talmud, (Shabbat 105a) will say that this verse teaches that it is meritorious to shed tears over a worthy person which are gathered and placed by God in a treasure room. A later commentator, Mahari Pinto, will state that those stored tears are the dew that will be used in a Messianic time to revive the dead. 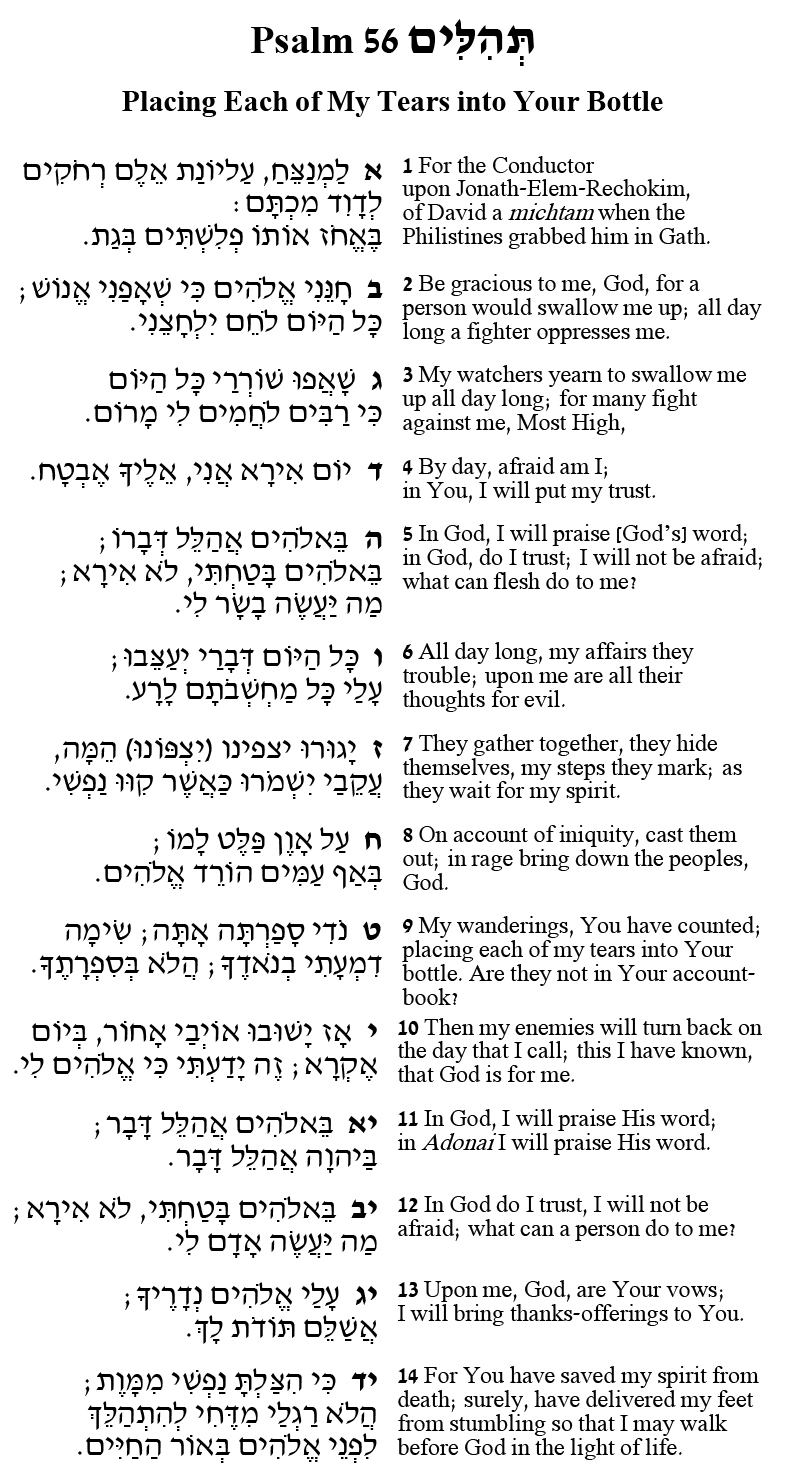