Psalm 54: “Upon My Enemies, My Eye Has Stared”
The wilderness of Ziph endured for King David as a close call (I Samuel 23: 14-28). David had fled from the deranged King Saul. The King’s son, Jonathan, had said to his best friend, “Do not be afraid: the hand of my father Saul will never touch you. You are going to be king over Israel and I shall be second to you; and even my father Saul knows this is so.” The Zephites went up to Saul and told the King that David was hiding among them. Saul himself travelled with his troops to capture the young, folk hero. The troops were encircling David and his men when word reached Saul, “Come quickly for the Philistines have invaded the land.” They promptly abandoned the pursuit of David, who soon found shelter in Ein Gedi.

This is the story that Psalm 54 references in its introduction. The Psalmist refers to the pursuers as “strangers,” which calls into question its historical origins. Afterall, David knew King Saul well. Modern scholars say that the composers of Psalms often chose an archetypical moment from King David’s life to convey their own harrowing dangers and redemptions. Psalm 54 contains lament, trust, and gratitude. The Psalmist concludes, “upon my enemies, my eye has stared,” noting both dangers past and confidence.

A close reading of a Psalm often reveals an ambiguity from Hebrew to English. The following is an example based on three words in verse six: אֲדֹנָי בְּסֹמְכֵי נַפְשִׁי. What is unclear is whether the support to the Psalter is directly from God or other people: “Adonai is among those who hold me up” (Richard Levy, similarly Metsudah, Artscroll and Robert Alter) or “Adonai, foremost among the supporters of my soul” (Martin Cohen, similarly Benjamin Segal). Such an ambiguity in poetry often points to both possibilities as simultaneously true.

Our close reading will both point out choices of understanding and even more importantly, enable us to consider how these ancient words of human danger and Divine trust resonate with our own life journeys. 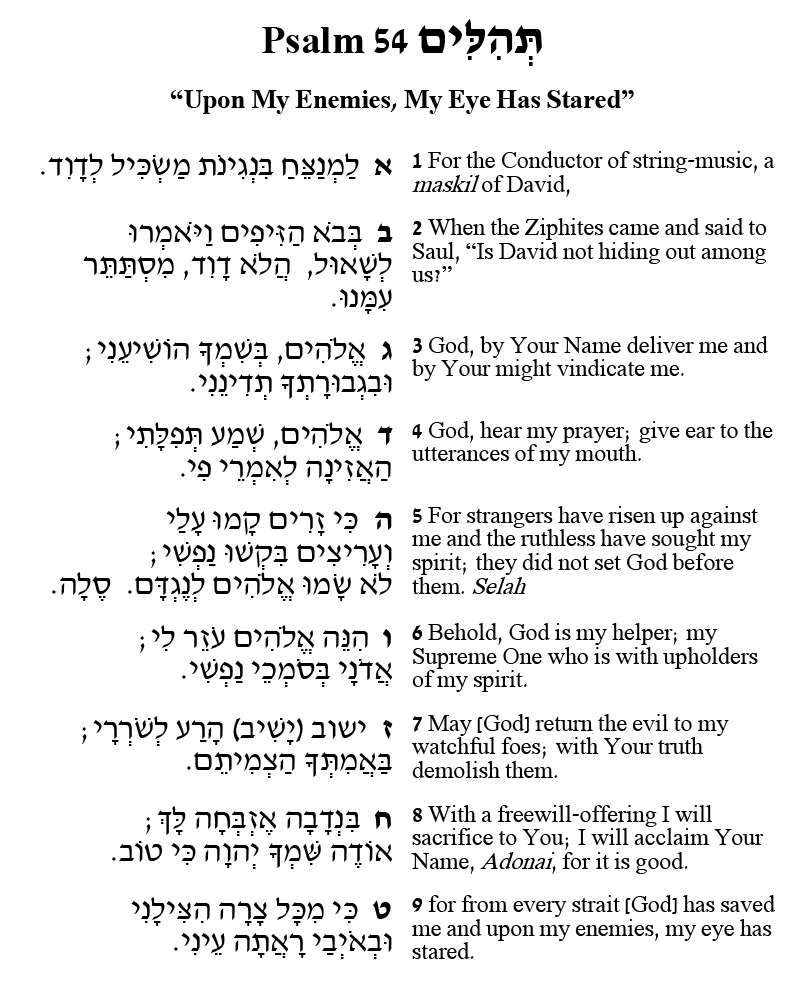