“With exodus of Israel from Egypt” begins Psalm 114. The Psalm touches on miracles on behalf of the Jewish people: the parting of the sea of Reeds and the Jordan; gaining water from a rock in the parched desert and standing before God at Mount Sinai. The telling of the Psalm is not of history, but imaginative celebration. For the Psalmist, not only were the Israelites transformed, so was the whole of nature: “the mountains danced like rams, hills like lambs.” The Psalmist addresses earth and stones and they answer to explain themselves!

The Passover story points to God’s supremacy over nature. The deliverance from slavery provides hope that God will enter into history and transform both physical and human nature in order to create a world of harmony. When we open the door for Elijah after the seder meal, we invite the prophet to join us so as to announce that the Messianic era is beginning. Psalm 114 in looking back prepares us for rejoicing yet ahead.

There are many surprises in this artistically woven poem. For instance, each sentence is composed of two halves. The second half has a missing element that is contained in the first half. Rabbi Benjamin Segal comments that this technique suggests that we have to look back to gain understanding of an incompleteness of the present.

Psalm 114 is dedicated to Irene Lancaster.

The Hebrew people leaving Egypt, led by Moses, on a mural in the synagogue of Doura Europos, in Syria.
Carl Cedar: “Betzeit Yisrael”- Click here to listen. 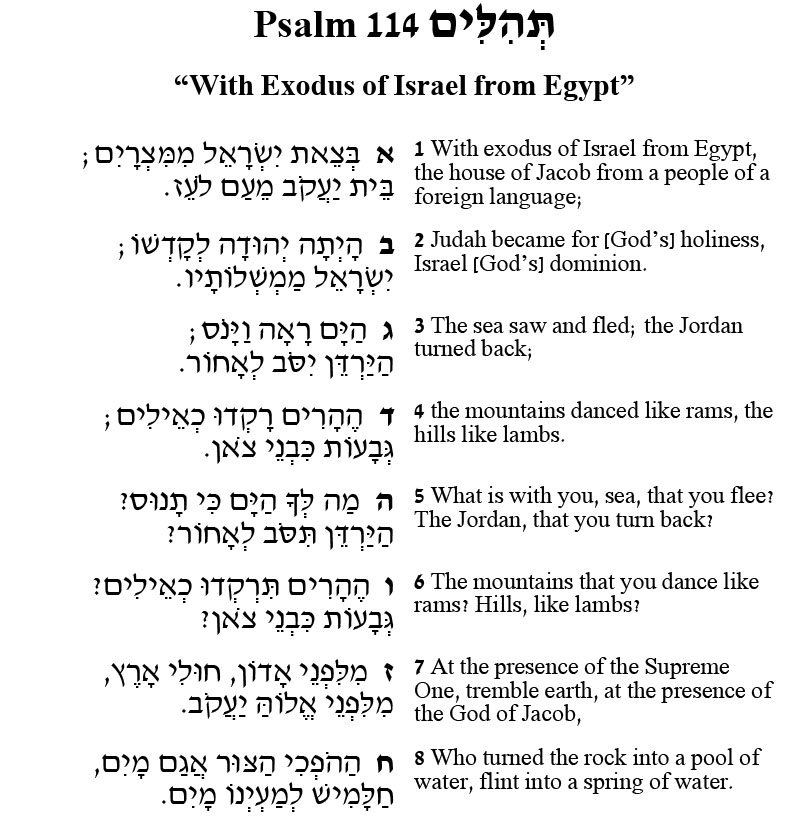