CBI members may attend without charge with RSVP by July 1st

“Two Jews, three opinions,” goes the old saying. But also, where there are two Jews, there are three melodies. Jewish music is kind of like tofu—wherever you put Jews, they absorb the musical “flavor” of their surroundings. From Calcutta to California, from Afghanistan to Albany, Jews share texts and traditions, but experience them in often radically different ways. We’ll choose examples of liturgy that is familiar to us, and travel through time and space in order to understand the manner in which a variety of different Judaisms heard the words and performed the rituals that are at the heart of our common, yet very diverse, tradition. 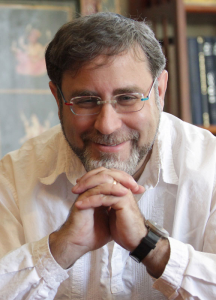 About Marc Michael Epstein: Winner of the 2015 Jewish Book Award in Visual Arts for Skies of Parchment, Seas of Ink: Jewish Illuminated Manuscripts, Marc Michael Epstein is the product of a mixed marriage between the scions of Slonimer and Lubavitcher Hassidim and Romanian socialists, and grew up, rather confused, but happy, in Brooklyn, New York. He is currently Professor of Religion at Vassar College, where he has been teaching since 1992, and was the first Director of Jewish Studies.

At Vassar, he teaches courses on medieval Christianity, religion, arts and politics, and Jewish texts and sources. He is a graduate of Oberlin College, received the PhD at Yale University, and did much of his graduate research at the Hebrew University in Jerusalem. He has written numerous articles and three books on various topics in visual and material culture produced by, for, and about Jews.  His prior book, The Medieval Haggadah: Art, Narrative, and Religious Imagination (Yale, 2011) was selected by the London Times Literary Supplement as one of the best books of 2011.

During the 80s, Epstein was Director of the Hebrew Books and Manuscripts division of Sotheby’s Judaica department, and continues to serve as consultant to various libraries, auction houses, museums and private collectors throughout the world, among them the Herbert C. and Eileen Bernard Museum at Temple Emanu-El in New  York City, for which he curated the inaugural exhibition, and currently serves as consultant for the Fowler Museum at UCLA, where he is in the process of helping plan a major exhibition on aspects of Kabbalah and its relationship to visual culture.