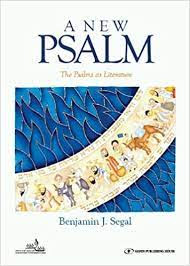 Rabbi Benjamin Segal, more than any other commentator, offered me insight into the literary artistry of the Psalms. Please join in a conversation with Rabbi Segal exploring what has drawn him to his in-depth study and what he believes that we as readers will gain from engagement with these ancient poems to God.

Rabbi Segal is an author and lecturer, living in Jerusalem. He is past president both of the Schechter Institute of Jewish Studies—the academic and educational center of Masorti Judaism in Israel, and of Melitz, the Centers for Jewish and Zionist Education. Previously, he served as the Director of the Ramah Programs in Israel.

Among his past volunteer roles, he was Chairman of the Masorti Movement in Israel and a member of the Executive of the World Zionist Organization, and the chairperson the Directorate of the Meimad (political) party in Israel.

Rabbi Segal was ordained at the Jewish Theological Seminary of America, in 1969, and served as a pulpit rabbi in Palo Alto, California. He made aliyah in 1973, and lives in Jerusalem with his wife Judy. The Segals have five children and twenty-one grandchildren.