CBI was at its best this past Sunday night, enabling an illuminating and at times heated conversation between two leading Jewish thinkers on the nature of Zionism and Jewish belonging. As you will see from selected emails below, the audience ranged in its political orientation and yet, consistently expressed gratitude for the level of discourse. I share with you below, a sampling of emails, including an exchange between our two presenters, an article posted yesterday in the LA Jewish Journal, and a finely-executed video recording.

I again want to thank Barbara and Joe Baim for their generosity and our host-committee, chaired by Beth Elster and Nancy Neudorf, who translated a great idea presented by Arie Katz into a memorable and enduring event.

Sampling of emails about the event:

“Absolutely FABULOUS! Well done!  Never seen two guys discuss so passionately and disagree so much with such respect for one another; and I agreed passionately with them both.  Except that Israel DOES have a critical PR problem, and it’s not up to Americans to fix that for them.

“I just wanted to congratulate the Temple for what was, in my opinion, the most thought provoking event I can remember attending here.”
I must say – the only agreement I have with Peter Beinart is the fact that we are both Jews. He is super intelligent but some of the things he said last night had me almost jumping from my seat (I believe Rabbi saw me looking through my phone and trying to find if Abbas said he would not accept Israelis or Jews in his State – frankly, a very semantic distinction).  In any event, it was a fantastic experience and Rabbi did a wonderful job at moderating and giving both a chance to speak.”

“Last night was so important; painful to be sure (a bit of a sleepless night for me), but the nuanced and heartfelt discussion was long overdue and so worthwhile.  Thank you for doing such a great job moderating and for encouraging us all to think in more sophisticated ways about Israel.   I had profound conversations today with two of my children, who care deeply about Israel but are so disturbed by what’s going on in the West Bank.  Hope the response has been at least mostly positive.”

“On a scale of 1-10, last evening was an 11.
You did a masterful job of getting the speakers to focus on important issues. Kol Hakavod.
They are both very bright and articulate and we gained keen insights on the differing perspectives of the current situation.
As much as I applaud Peter Beinart’s espousal of human rights, I feel the safety/security of Israelis has to take precedence.” 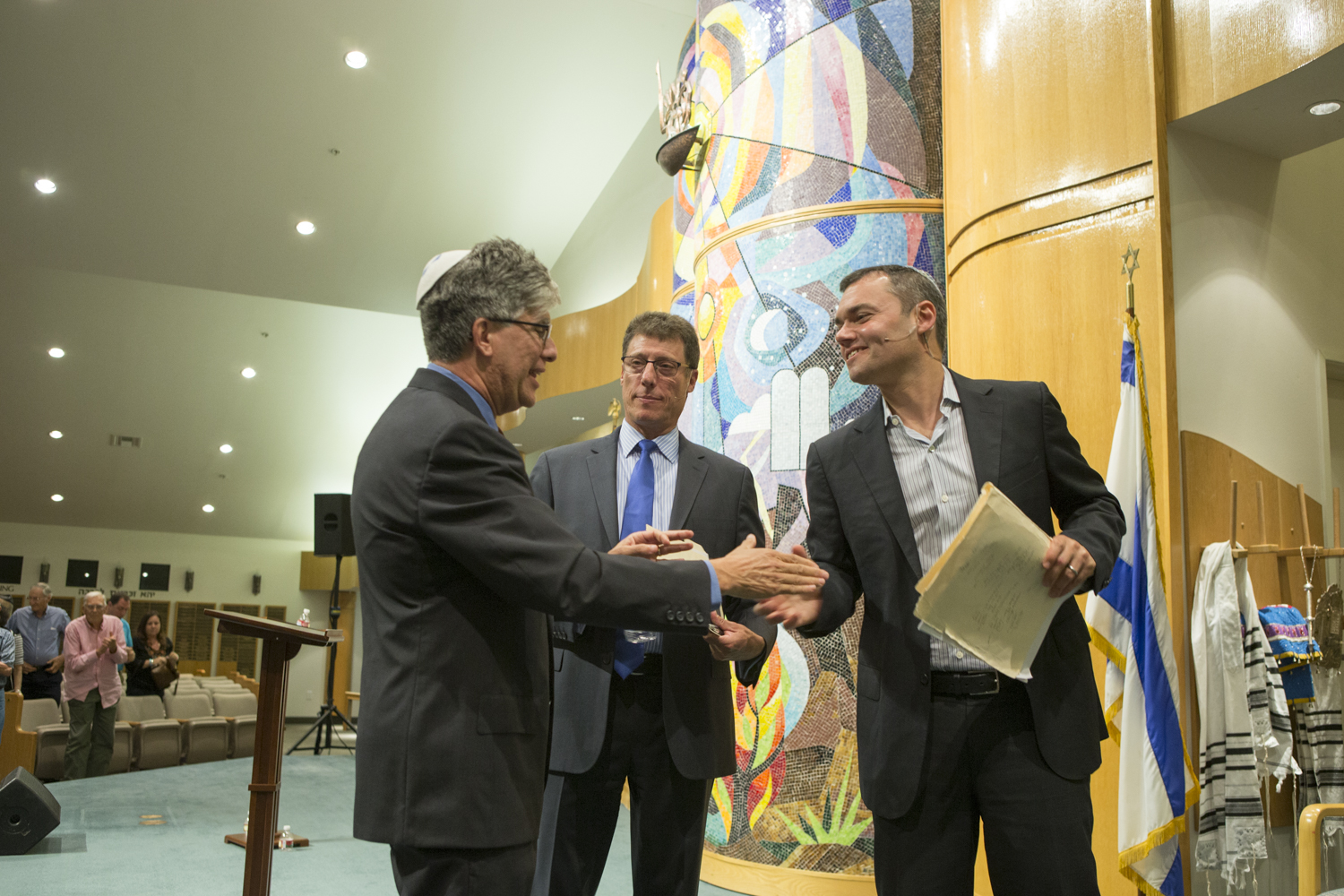 And a final exchange between our presenters via email (September 13th)

Now that I’m on a “non-travel” day, I find a moment to thank Elie for the lovely note, to thank Peter for an engaging, honest and (I thought) deeply respectful and civil conversation and to Elie and his entire community for the invitation. I thought the evening was lovely. I think Elie did a masterful job of keeping the evening moving while giving Peter and me enough time to respond to each other and to have a real conversation. Peter was, as always, deeply thoughtful, sincere and compelling, and the community was respectful, and, I sensed, appreciative of the honesty of the evening.

It was, I think, what Jewish discourse on this subject (plus many others) should be like, and I was deeply honored to be included.