Elie Wiesel was my teacher. He passed on Shabbat. I mourn, for I loved him and felt beloved by him.

During my three years of Rabbinical School in NYC, I worked at the 92nd Street Y, where Professor Wiesel gave four talks a year. He presented portraits of Biblical, Talmudic, and Hasidic figures by reading in a near whisper with a melodic voice, punctuated by expressive hand gestures. Many leaned forward to catch each carefully chosen word. Afterwards, he lingered to meet and greet, usually being among the last to leave. Once I saw a man kiss Wiesel’s ring. He blushed. He saw himself as a teacher and not as an icon or a religious leader. Before those presentations, I had the opportunity to sit alone with him in the Green Room. In the intervening years, we continued to meet in his New York office and at Chapman University. After each conversation, I immediately wrote notes, eager to retain his thoughts. The mood was always warm and relaxed. He displayed curiosity and concern by interviewing me before I could ask him questions.  He insisted that I call him Elie, unless I wanted him to call me Rabbi Spitz. In those conversations, he demonstrated fullness of presence.

In 1999, I invited Elie to help dedicate CBI’s new sanctuary. His agent, Ruth Wheat, would tell me her instructions, “Let him pay whatever he can afford.” He flew on a red-eye each way for a single day’s visit. When I met him in LA, he said, “I told you that I would come.” And so he did, a generous act of mentorship and friendship. I had made my request with a story. When I was eleven years old, my rabbi in Phoenix, Moshe Tutnauer, celebrated our new synagogue with a lecture by his teacher, Rabbi Abraham Joshua Heschel. When I read the great theologian for the first time many years later, I evoked his voice and presence. “Please dedicate our new synagogue and be that presenter for our children,” I asked, “so that when they will later read your books they will hear your voice.” In the evening we had a public conversation for adults. In the afternoon, we had invited all the students of the Hebrew schools in the county as a shared gift. You can witness that public conversation, by going to our website: https://www.cbi18.org/sermons/conversation-with-elie-wiesel-november-181999/.

I never took a class with Professor Wiesel, but he was my teacher. His writings, public presentations, and those personal conversations, shaped my worldview and aspirations of character. His accent reminded me of my parents’, who grew up in the same Carpathian region before the Holocaust, a word that Wiesel was the first to use for those horrific events. I thought of him as an uncle who put into words what went beyond what I was told by my parents. He was my teacher as well because he embodied the values of the sages that I studied.

Let me share some of those teachings that endure for me.

Evil exists. And grows when otherwise good people ignore it. The most painful moment in the Bible is when Joseph’s brothers throw him into a pit and then sit down and eat a meal (Genesis 37: 24-25). Indifference persists in our world when people suffer and those who feel safe, smugly ignore or classify the other as alien.

Antisemitism endures. Its first telling is in the Biblical story of Exodus when Pharaoh’s announces, “The Israelites are becoming too numerous and mighty for us. Let us deal shrewdly with them, so that they do not increase; lest if there is a war, they will join our enemies in fighting against us, driving [us] from the land” (Exodus 1: 9-10). Wiesel said, “We cannot explain antisemitism. It is essentially irrational. And when allowed to spread, causes much death and suffering.” And yet, injustice is inclusive. When a donor to the Holocaust Memorial Museum in DC, of which he served as the founding chair, offered millions of dollars with the condition that the museum only focus on the Jews, Wiesel advised his board to turn the money down. Hatred caused many victims besides the Jews who were also to have a home for memory. The Jewish response to suffering is not victimhood, but the drawing forth of core, universal values to share with others.

God is a mystery. I once spoke with Elie about the loss of a young family member to an undiagnosed illness and asked what he thought of the image of a limited God. “God,” he replied, “is a question mark. I cannot say what God chooses or not to do.” And yet, it was clear that Elie honored God with daily prayer, study, and Shabbat observance. He did so, both because of a loyalty to the Jewish people and a desire to reach out to God despite the awareness that the simple access to God as “Tata,” Father, of his Hasidic youth was now more complex and elusive.

Humility is the trait of greatness. In the Bible there is only one adjective used to describe Moses: “the most humble of people on the face of the earth”  (Numbers 12:3). Elie Wiesel too saw himself as a servant teacher. He wore his accolades lightly.  His accomplishments were massive- authoring over 60 books; publishing Night in 1960, initiating a genre of Holocaust memoirs and successfully encouraging other survivors to write their own accounts; with his book The Jews of Silence helped galvanize the Soviet Jewry Movement; as founding chair of the US Holocaust Museum placed the call for human justice at the center of American identity; a recipient of the Nobel Peace Prize, he was a confidant of leaders of nations and shapers of culture- and yet, always remained personable and genuine in speaking with any other individual.

“And yet,” was among Elie’s favorite expressions, because context matters. Paradox describes reality. In that light, some examples of the paradoxes that defined Elie:

I write these words on a flight from Germany, marking my first visit. As a child of Holocaust survivors, Germany was not on my to-do list. And yet, I heard Elie Wiesel say, “We Jews do not believe in collective guilt. The children and grandchildren of the perpetrators are not to blame.” His words motivated me to encounter the people and the language that I identified with pain. What I found were Germans contritely owning shameful memory and taking in more refugees than any other Western nation today. History does not move in a straight line.

And yet, Elie saw that humanity is all too often indifferent, including Jews. History, he said with sadness, teaches that people do not learn from history. Elie was a prophet for justice and the context of his life gave truth to his goading words.

Elie was our collective “Elie.” He spoke for us and to us. He was our witness and Biblical voice.  He taught us that our Jewish heritage is a treasure worth studying and living. He showed us that words matter profoundly and are limited. He was only a man and yet his deeds model that each of us can be more fully human, more fully a dedicated spouse and parent and friend, duty bound to community, and dedicated as a humble servant of the Holy Blessed One.

Elie Wiesel will endure as my teacher by word and example. He will be with me each day as a source of nurture and challenge. His memory calls on each of us to love, empathize with the one already known and the stranger, and to serve. The world is a bit darker for his absence. May we each amplify the sparks of his enduring light.

I share a few tributes of Elie Wiesel that particularly moved me:

Menachem Rosenschaft, “A Tribute from a Friend and Disciple,” http://www.tabletmag.com/jewish-news-and-politics/206702/remembering-elie-wiesel-a-tribute-from-a-friend-and-disciple 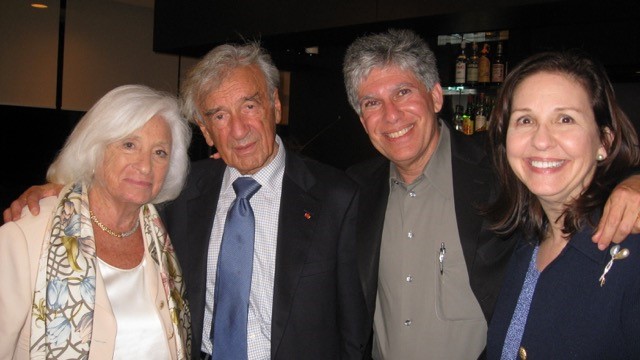 Marion and Elie Wiesel, with Linda and Elie Spitz, 2013